Who? Consuela Cambridge (1993)
Alumna of: Chemistry & Master’s degree in teaching Molecular Sciences
First job: Promoting loyalty cards at the Lucky Store, a department store in Suriname
Favourite place at the UvA: At Science Park there is this kind of landing where in the summer you have a view of all sorts of different birds; a nice place to sit.
Essential: Variety, a dynamic and multicultural work environment.

‘I was born in Suriname and raised by my mother and grandmother. I have a brother who is 25 years my senior. In Suriname, you are never indoors; over there, life happens outdoors. You play with everything: fire, nails, hammers. I fished a lot and I had green fingers so I had my own little garden. Although I was shy at school, I always sat at the front of the classroom. Lots of women in my family have worked in education. My grandmother was a nursery school teacher and my mother was a teacher. My mother always said: “You go to school to learn, so on the first day you sit up front, near your teacher, because you need to hear what she says.” A teacher once commented that I was like a sponge: I absorbed every word that came out of her mouth.’

Chemistry students are not all nerds with glasses and messy hair who want to blow stuff up.

‘University preparatory education (VWO) in Suriname is different than in the Netherlands. Over there, secondary school is divided into two parts. The MULO (advanced elementary education programme), which comes before secondary school, lasts four years. I sat an admissions exam in the third year in order to be able to start secondary school a year early. In the advanced elementary education programme, I opted for the science track because I did not want to take economics. I discovered chemistry in secondary school. I grasped it well and earned very high marks. I thought, oh my god, I’ve found it. Chemistry suits me. Even though I played outside a lot when I was little, I am also intellectually oriented. In one of the practicals, we isolated the ammonium chloride from salty liquorice. We boiled the liquorice down, performed analyses, titrated, used dyes. Chemistry can be a bit messy, which actually appealed to me. Getting your hands dirty while at the same time engaging your brain. That combination is what makes chemistry what it is. You do your research and then you go into the lab.’

‘What interests me about chemistry is the question: Why do molecules do what they do? Whilst the lab work is fun, the theory behind it is what fascinates me most. During secondary school, I learned that the reaction of an acid with a base produces a salt and water. So that’s nice, but why does that happen? We never went into that; we simply had to know the chemical equation. Teachers always said:  “If you want to know that, you have to study chemistry.” “Watch me,” I thought to myself. At the time, chemistry was not an option at the university in Suriname, which meant that I had to go abroad in order to study it. The choice was relatively easy: I speak Dutch and I have family living here. My cousin was enrolled at the UvA, which prompted my decision to study here. I had been to the Netherlands twice on holiday, so the country was not entirely new to me.’

From Suriname to the Netherlands

‘The registration process for foreign students who are not from the EU is rather lengthy. It took a year for me; I was lagging behind in physics because I had dropped the course the last two years. I had to make up for this shortcoming in a pre-Master’s year. In addition, I had to meet the income requirements and the university was obliged to apply for a residency permit on my behalf from the IND, the Immigration and Naturalisation Service. A visa had to be arranged through the Dutch embassy in Suriname. Because I did not grow up with the internet like the average Dutch student, I quickly found myself overwhelmed. I received a lot of support from the UvA, which helped tremendously. I was also lucky that my aunt lived in Amsterdam. She made numerous trips on my behalf to the ESC Service Desk, which deals with matters including immigration.’

‘Ultimately, I arrived in the Netherlands four weeks too late for my degree programme. We had a practical on my first day; I reported to the lab and was assigned a partner. I took the product of our reaction and – splat! – tossed it in the sink. That is completely out of line, at the very least because of the environment. Having missed everything that had been covered during the first four weeks, I was not aware that we were supposed to save, weigh and analyse the product. It was a strange day but, despite the false start, everything turned out great in the end.’

The UvA is informal in a good way.

‘The UvA is very international. You encounter people from Brazil, from Peru, from Iceland. I would never meet someone from India in Suriname. Diversity and a dynamic environment are extremely important to me, and therefore the University reflects my personal values. The UvA is also quite informal for a university. Not in a bad way; I am an informal person, so it suits me well. The contact with your professors and your seminar instructors is very open. You can simply send an email, or pop into the staff rooms. The same goes for the students. Perhaps it differs according to degree programme, but in chemistry nobody is really a nerd who studies 24 hours a day. It is relaxed; everyone is themselves and is accepted.

Supervising students inspired me to pursue the major in teaching within my Master’s programme.

‘I love interaction with people and I need to have an outlet for that, too. I am good at bringing things across. During the third year of my Bachelor’s programme I was fortunate to be a tutor for two groups of fifteen to twenty first-year students. Although it takes a lot of energy to mentor a group, it also is energising. If I was having a bad day, the tutoring would cheer me up. Supervising students inspired me to pursue the major in teaching in my Master’s programme. I said to myself: I want to learn more about this. While I don’t think I will ultimately go into education, I am still glad I did it. I do want to do something with speaking to groups, providing information and training, helping people with their personal development. It is a very special niche – people tend to visit a psychologist rather than a chemist for that sort of thing, but it is certainly something I am aiming for.’

Are you inspired by Consuela’s story? Our Bachelor’s in Chemistry might be something for you.
Read more 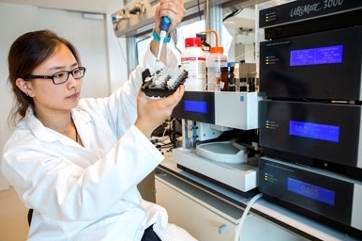 Have you completed your Bachelor’s programme? The Master’s in Chemistry might be something for you.
Read more

Interested in becoming a teacher? Take a look at our teacher training programme for students of Chemistry.
Read more