Who: Pleun Aarts (1995)
Studied: Bachelor in Future Planet Studies, Master in Biological Sciences, track: Ecology and Evolution
First job: At an ice cream parlour in Utrecht
Favourite spot at the UvA: The coffee corner at Science Park; a woman named Sjeel works there. She is very sweet and always remembers your name and drink order.
Essential: A statistics book

‘The exact sciences are pretty big in my family, you could say. My father studied Artificial Intelligence and while my mother did Linguistics, I think she would have been happy to pursue an exact-science degree as well. She and my father really encouraged me and my three sisters to take an interest in those disciplines. I did a cultural course packet in secondary school, and took biology and geography as extra electives. Geography was my favourite class. While I enjoyed the science classes, I wasn't sure if I had any talent in that area. In the end, I'm happiest with a combination of exact and social sciences. That's why I decided to enrol in Future Planet Studies, just like my older sister. It's not quite “hardcore” exact science, but it comes close.’

I wasn't sure I would be able to do it... but it struck me as a fun challenge, so I went ahead and tried.

‘I've been on many camping trips in my life, spent a great deal of time outdoors. That's what sparked my interest in nature. People's relationship with nature fascinates me, as does the way in which nature has adapted in response – how it shows a certain resilience. I took the Ecology track within the Future Planet Studies Bachelor's programme. The future of the Earth and sustainability were things that always interested me anyway, and a lot of the Future Planet Studies programme centred on those issues. I didn't take exit-levels in chemistry or physics, and biology and maths weren't my strongest subjects in secondary school, so I wasn't at all certain I would be able to handle a biology-heavy programme like this one. It struck me as a fun challenge, though, so I went ahead and tried.’

‘When I started Biology, we took an introductory weekend trip to Texel. There, we had to do all kinds of weird things with plants and I asked myself, what am doing here? After that, we had to take a really advanced maths course, which was not my thing at all. The first time class met for that course, we watched a video about cannibalism. It explained that it's actually a very normal phenomenon that's quite common in nature. And suddenly I thought it was all incredibly cool. That video made it clear that mathematics isn't a purely abstract discipline, because it can be applied to things like cannibalism in an extremely concrete way. When you do that, subjects like maths become much more tangible, because you understand how they connect to less-abstract matters. It motivated me to really put forth my best efforts in that course.’

‘Biology is a fairly concrete and more or less 9-to-5 field. The programme involves a lot of collaboration. I like that; it's much more enjoyable than sitting in the library reading books by myself. There was a lot of applied learning, both on the computer and outside the classroom. For instance, we once spent a week in Northern France, where we had to set up our own experiment to study how a specific type of seaweed grew along the entire coastal gradient. That was really fun. We also spent eight days doing paleo-research in Drenthe. Paleo-research is like archaeology, but with nature. By looking at pollen that's thousands of years old, you can determine what the climate was like in the past and how the landscape must have looked then. During the day we walked through the woods identifying plant species, and in the evenings we sat bent over our microscopes, drinking beer.’

‘My Master's programme is a two-year Research Master's. For the first six months, you take courses, after which you conduct two large experimental research projects and do a literature review. I just completed my first experimental research project, which was about snails in an urban setting. Even though I love nature, I definitely thrive in the city – and this project was a fun way for me to combine the two. Evolution is taking place in the city in a great many ways, among a great many species. My research looked at how the common garden snail has adapted to living in Amsterdam's urban environment. I criss-crossed the city on my bicycle, collecting snails in parks, gardens and in the Amsterdamse Bos landscape park. Then I did an experiment with the snails, in which I used a small paintbrush to startle them. The startle response made them withdraw into their shells, after which I counted how long it took them to re-emerge. This was a way to test how long the snails remained hidden when facing potential danger. By repeating this a few times per day over the course of three days, you can see if there are differences between animals found in and outside the city. It also allows you to see the extent to which the behaviour is an individual characteristic. It may be a bit of anthropomorphism – ascribing human qualities to an animal – but this lets us distinguish whether snails have personalities.’

‘The study was a “citizen science project”, which means members of the public can take part as well. I spent one week working on the experiment with an elementary school class. First, I went hunting for snails in the park with a bunch of twelve-year-olds. After that, we carried out the test scenario at their school every day. While the results weren't scientifically sound enough to use in my study, the children were extremely enthusiastic and I ended up learning a great deal. Like how to explain things to someone who is not a scientist, and how to get other people excited about the study of biology. I noticed that I enjoy telling stories and drumming up enthusiasm, so that's something I'd like to do more of. Which is why I'm currently taking a course in scientific journalism. I don't necessarily want to become a researcher myself, even though I think it's important and interesting. The way the work is set up is just too individual for me, and I'm not meticulous enough to spend years working on a small project. Still, I think it's a good thing that some people do – which is why it's important to me that their work is communicated to others in proper fashion.’

‘By the time I was fifteen, I had already signed up for student housing via StudentenWoningWeb. While I didn't even know what I wanted to study yet, I was certain I wanted to attend university in Amsterdam. I was born here and spent the first few years of my childhood in a friendly, diverse neighbourhood in the West district. I love that there's always something going on in the city, I'm interested by people who don't feel the need to conform all the time. I chose the UvA mainly because of the degree programme, but I happen to like it here as well. It feels sociable. The buildings at the Science Park have that effect, too. I feel at home there: it's comfortable, light and airy, and it's easy to find people. UvA students are unafraid to express their opinions; they're prepared to make a stand for their beliefs. And they tend to be engaged with a wide variety of things around them – not just parties, but culture, museums and films, too. That's how I am: I like it when, instead of limiting themselves to the university bubble, people are focused on the city around them and on all the things you can do here.’

Done with your Bachelor’s? The Master track Biological Science might be just the programme for you.
Read more 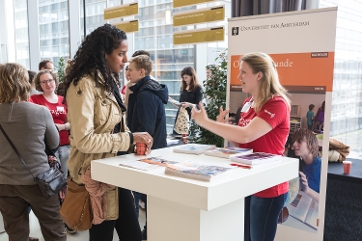 Want to find out more about the different Master’s programmes at the UvA?
Read more

Studying at the UvA

Want to know more about studying at the UvA?
Read more