Keeping the streets clean in a dynamic urban environment is one of the major challenges facing Amsterdam City Council. Amsterdam Business School researcher Maarten Sukel developed a system that can recognise rubbish bags and other undesirable objects lying around in the street. The system can spot the object in real time and is based on machine learning.

The Urban Object Detection Kit allows streets and other aspects of the public environment to be scanned with machine-learning technology at low cost and maximal efficiency. This could be a solution to a number of ‘blind spots’ in the current methods used by Amsterdam City Council. ‘In some neighbourhoods, every rubbish bag beside a container is reported while, in other places, rubbish is piling up. This creates inequality. In addition, the existing monitors that work on the basis of images have a frequency that is too low. By this I mean how often such a system collects new information. In some cases, we’re talking about photos being taken once a year. But the situation for litter can vary from hour to hour. This is why a system was needed to monitor it in real time.’

The new system, which is currently being tested by the council, offers a cheap and generic solution that can easily be used in other cities as well. ‘We use smartphones linked to vehicles with an application that generates pictures. These are sent on to our server for object recognition. We use the real-time object recognition system YOLO (You Only Look Once), which can process images very fast. Then we look if the results agree with reports from the neighbourhood itself.”

This system solves a big problem. Amsterdam City Council has as many as 15,000 underground containers. ‘You can’t continuously drive past to see if there’s something lying next to them. For some things, like bulk waste, you need a special vehicle. By doing it properly from the outset, we not only keep the city clean but we also reduce the mileage.’ Privacy, however, is an important point. ‘We drive around with cameras and every citizen of Amsterdam should be able to move through the city without being followed. We only save images if they’re necessary for further research. Faces and distinguishing marks are removed.’ 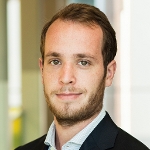 Copyright: ABS
This project has brought together a lot of expertise, from the development of an application that is user-friendly to the back end of the system. Maarten Sukel

The system can be applied beyond the recognition and removal of waste. ‘It can also be used to recognise dangerous situations such as a knocked-down bollard or a crooked paving stone.’ The system is also very suitable for further research at UvA. This was an important requirement for the project. ‘We want to focus on useful applications for urban areas and we certainly wanted to incorporate that into this study. We initially chose the waste disposal problem as our focus because from a technical perspective this could be attained fastest. In order to learn, AI requires huge amounts of data and there were many images of rubbish containers and waste available.’

To carry out the research, Sukel worked together with many people. ABS supervisors Marcel Worring and Stevan Rudinac played an important role and, at the city council, Sukel collaborated with various domain experts. ‘This project has brought together a lot of expertise, from the development of an application that is user-friendly to the back end of the system. And let’s not forget the people who collect waste and clear graffiti for the city council. It’s a nice combination of specialists.’

Amsterdam City Council sees a bright future in the deployment of machine learning. As a result of his research, Sukel is now working part-time for the council. Here, as AI Lead CTO, he is setting up a team of developers who are going to design applications for the city. The team works with, among others, Civic AI Lab, a vehicle for the AI knowledge of the city council, the University of Amsterdam and the Vrije Universiteit. ‘In my team, I work with talented people who focus on the deployment of AI for a great many issues. A critical issue at this moment is the approach towards COVID-19. Using enriched data from the city centre, we are working on a number of applications. These predict how busy it will be in certain streets and issue warnings if people don’t keep enough distance.’