Protest is an important means of making yourself heard as a citizen, and sometimes even the last resort. We see this with the protests in the US and in Hong Kong, but also closer to home. But how is protest heard? Nanke Verloo will be investigating this question, specifically in Amsterdam.

As of September this year, Nanke Verloo, Assistant Professor of Urban Planning at the University of Amsterdam, will spend five months researching citizenship in Amsterdam. She will be examining a specific form of civic participation in decision-making processes, namely protest. ‘Protest isn’t usually seen as a form of civic participation, although in my view it certainly is. Protest is actually a clear way of showing your political involvement,’ says Verloo.

But how is protest heard and how does protest influence policy? These are the questions Verloo aims to answer.

A broader definition of citizenship

Her research concerns citizenship, but what do we understand by this term? You can define citizenship in different ways. ‘In legal terms, it actually means nothing more than that you are the citizen of a certain country, meaning that as a citizen of that country you have access to a set of rights and obligations,’ explains Verloo. ‘In the Netherlands, for instance, these include the right to education and social safety, and the obligation to observe the laws of the land. The social and political definitions of citizenship are about the degree to which citizens actively participate in society, such as the extent to which citizens take care of each other or their ability to manage themselves.’

The City of Amsterdam already organises a great deal in the field of public participation. This has long since moved beyond the level of an evening in a stuffy little hall where a number of speakers make presentations and citizens can respond. Even in the new interactive and creative forms of participation, however, not all city residents will feel at home and feel heard. ‘The participation process remains limited, with a certain repertoire, and still very formal,’ believes Verloo. ‘How can you get all residents, with all their different backgrounds, involved in the process? Many citizens can’t relate to the proposed form of participation or don’t know how to use it. Protest then becomes the only remaining option.’ 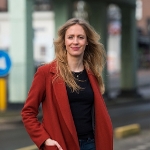 ‘However, you should realise that protest is almost never the first thing you do to be heard. It’s often the last resort – things have built up to this point. This is the case with the current anti-racism protests: these groups haven’t been listened too properly for too long. The protests haven’t just come out of nowhere, and they aren’t new either. It’s important to realise this – the history behind it.’

The spatial dimension in protest

The spatial dimension plays an important role in the history of protest. It is also a focus in Verloo’s research. ‘Of course, there’s a great difference between the local protests in Amsterdam, which I’ll be studying, and the mass protests against racism. But in spite of this I also see a clear correspondence, namely the spatial dimension in the process of exclusion. In the USA, you see that spatial policy and rules led to strong segregation until well into the 1970s and robbed both areas and groups of many opportunities, in addition to leading to strong stigmatisation.’

‘In Amsterdam, too, we see that this spatial dimension of inequality plays a role: through districts where groups have fewer opportunities, gentrification that forces groups of residents out of certain districts, and the public space that is laid out in a certain way. Look at the names given to streets and squares, for instance. Where these include the names of Dutch people who grew rich from the slave trade, you bypass the history of a large group of citizens, which in turn leads to exclusion. These social and spatial forms of exclusion lie at the root of the anti-racism protests, but often play a role in local protests as well. Groups protest because they are excluded, not heard, and systematically treated differently.’

However, seeing how the authorities can do things better is not her only focus. She will also be charting the experiences of the protesting citizens. On the basis of these lessons, she will draw up a manifesto for effective protest: what gets results, what doesn’t? ‘A manifesto like this is important, because these are groups that often initially arise in an informal and ad-hoc way. Naturally, they can already gather plenty of information through the media, including social media, but I hope that this manifesto can set out some useful experiences and tactics for effective protest that really does have an effect on policy.’

Verloo will be conducting this research as part of the Urban Citizen Fellow programme, for which she has been selected by the City of Amsterdam and the Netherlands Institute for Advanced Study in the Humanities and Social Sciences (NIAS KNAW). With this programme, set up in partnership with NIAS KNAW, the City of Amsterdam aims to help achieve a more inclusive city in which all residents can let their voice be heard.