For millions of people, small fish such as mackerel, sardines and anchovies are a crucial source of food. Small fish are nutritious, cheap, and can be found swimming in schools all over the world. Despite this fact, it is an area still neglected by food security and ocean management policy. ‘Although poorer consumers can still get their hands on small fish, that may not be the case for much longer’, warns maritime geographer Maarten Bavinck.

UN International Sustainability Goal 2 states that hunger must be banished from the world by 2030, and that all people must have access to sufficient safe and nutritious food sources all year round. ‘When it comes to food security, we often tend to look at the global food supply as a whole’, Bavinck explains. ‘However, it's just as important to examine whether that food is accessible – that is, affordable and available – and whether the quality is high enough.’

These three pillars of food security – availability, accessibility and quality – were the focus areas of the Fish4Food project sponsored by the Netherlands Organisation for Scientific Research (NWO). As part of the project, Bavinck and his research team investigated the small-fish food chain, which constitutes an important food source for poorer consumers in cities in the southern hemisphere. What are the strengths of the chain, and where are the weak links? 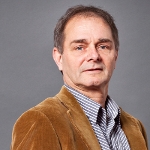 Bavinck and his team discovered that the small-fish food chain is often surprisingly robust, but is also under threat from several developments. These include dwindling fish populations in certain coastal areas, the greater economic value of larger fish species and farmed fish, and the use of chemical preservatives. ‘But there are opportunities here, let's not waste them.’

Research in India and Ghana

Fish4Food looked at the small-fish food chain in various coastal and inland cities in India and Ghana. Both countries have a strong culture of fish consumption, and many city-dwellers (particularly the less wealthy) eat many types of small fish. Via a large survey, the research team collected consumption data and spoke to people about the entire food chain, from fishers to consumers, and specifically also to female traders. Lastly, the quality of the fish was examined in collaboration with three other international research projects, including IKAN-F3 (also run by researchers at the University of Amsterdam and focusing on Indonesia).

The chain is functioning efficiently, but is under threat

The results in a nutshell:

Fish on the political agenda

Small fish offer big opportunities: they reproduce quickly and are in plentiful supply, are very nutritious, and the supply chain is surprisingly effective.  However, Bavinck believes there is still too little attention devoted to small fish on the international agenda. ‘Globally, people focus mainly on the so-called high-end fish that are farmed and shipped primarily to wealthy consumers, in Europe and elsewhere.  Small fish are of less commercial interest, except in the fish meal industry. Fish meal made from wild fish is an important ingredient in the fish-food used in farming. Since the fish meal industry has expanded considerably in recent decades, one major source of concern is its potentially negative impact on the food security of poorer communities’, Bavinck explains.

Bavinck also points out the importance of small fish and other marine food sources within a broader oceanic context. ‘Oceans are being used for an increasingly wider variety of activities – take seabed mining or power generation, for example. But we mustn't forget that the oceans are an important source of food, and calculations show that oceans could potentially supply much more food than they already do. This is important in connection with the predicted increase of human populations.’

In conjunction with other international partners, Fish4Food is working to place small fish more firmly on the political agenda. ‘Let's seize the opportunities that are there.’ In any case, a two-day seminar scheduled for February 2021 at the Food and Agricultural Organisation of the United Nations (FAO) will be dedicated to the topic. Fish4Food will also be organising more debates on small fish in India and Ghana.

Fish4Food (Fish for security in city regions of India and Ghana: an interregional innovation project) was launched in 2016 and receives funding from the NWO WOTRO programme. The project is coordinated by Prof. Maarten Bavinck and Dr Joeri Scholtens at the University of Amsterdam.

IKAN-F3 (Innovative Knowledge About Networks – Fish For Food) was launched in 2018 and will run until 2021. It is also funded by the NWO WOTRO programme, and analyses the supply chain for small fish in Indonesia. The project is run by Dr Gerben Nooteboom and Prof. Maarten Bavinck, University of Amsterdam.